L: (patiently) You refuse to go to Arenal National Park. Why?

D: Because everybody else goes there.

L: There might be a reason for that. Maybe it’s really worthwhile.

D: But the volcano’s broken.

D: It sounded excellent in our old guidebook. You could see it exploding and glowing red every night, and my brother Tom said it spewed so much ash and cinders all over them while they were on a walk, that their guide got really worried. I want all of that.

L: Well, I’m afraid it’s stopped. Hardly a puff or a grumble since 2010. It could start again at any moment though. Today even. It was perfectly calm for nearly 500 years until suddenly in 1968, it woke up, and produced several huge explosions and a gigantic lava flow which wiped out two villages, killing 80 people and 45,000 cows.

D: Blimey. How awful. I don’t want all of that.

L: No. You certainly don’t.

D: But if it’s now dormant again, why hasn’t that stopped the tourism? Why do people still go there?

L: Well….firstly, the volcano itself is an enormous perfect cone rising out of a gorgeous landscape, so it looks really iconic. Secondly, there’s lots to do. We could go for a walk at the foot of the volcano, or on some hanging bridges through the forest canopy, or wallow in some hot springs, or go to a waterfall, or ride a horse or an ATV. And thirdly, the Laguna de Arenal is the biggest lake in Costa Rica, and is one of the best places in the world for windsurfing.

D: I hate horses – they bite. I’m rubbish at windsurfing. And there are hanging bridges at Monteverde.

L: (tactfully) Gosh, is it that time already? I had no idea it was so late. Let’s have a big drink. And some peanuts.

D drinks a glass of beer, and urgently eats peanuts, in intense silence, for a few minutes, and then grins.

D: Thank you. Better now. It seems I was a bit thirsty. And hungry. What were we talking about?

L: Your enthusiasm for Arenal.

D: That’s right. It all sounds splendid. When shall we go?

They drive to Arenal. The journey takes four hours. Although at only a couple of hundred metres above sea-level, and therefore hot, the surrounding landscape is green and lush, with crops and rich pasture land sprinkled with cattle ranches. They are now on the Caribbean side of Costa Rica’s central mountain ridge, which gets plenty of rain. Ahead of them, a rugged range of lowish mountains rises from the plain, with Arenal standing impressively at one end.

L: Lovely. I didn’t realise that the volcano was part of a range of hills. It always looks as though it’s on its own in the photos. Pity that the top is in the cloud.

L: Rather than stay in town, I’ve booked the most basic room in a posh hotel near the lake. It won’t have a volcano view. We’ll probably have a view of a wall. Or the bins. But there’s a pool, and nice gardens. And it’s close to the things we might want to do.

They drive through the little town of La Fortuna and out the other side, towards the volcano. And on past other hotels. And on past the National Park entrance. And on, until they begin to worry that they are leaving the area altogether.

L: There! On the right. There’s a sign. And a barrier. And a man with a clipboard.

They are scrutinised with some suspicion. L wishes that the back seats weren’t draped with drying underwear. The security guard shakes his head, but then reluctantly lifts the barrier and they are through.

D: Crikey – this is one of the worst roads I’ve ever come across!

He changes into 4WD and carefully picks his way up the impossibly steep drive, paved and yet riven with potholes and erosion channels and loose rocks. Two kilometres further on, they are greeted by a cheerful hand painted sign: “You’ve Made It!”

They park, brush biscuit crumbs off their fronts, and walk into reception, where they are greeted effusively.

Reception guy: Welcome! Long journey? First time here? You are from where? England! I just love the English accent! It’s so fancy.

D: (seriously) Ah yes. The way I speak certainly is rather fancy.

L: Never mind. Maybe we could just leave our luggage and come back later?

Reception guy: Hold on. Just a moment. Let me speak to my manager. Yes? OK. Follow me please. We do have a different room, which just might be suitable. It’s an upgrade. Come and see if you would find it acceptable.

He leads them past a sign saying “Matrimonial Suite” onto a private terrace, and through a door into a wood-panelled sitting room. Beyond is a king-size bed next to a huge picture window looking directly across the gardens to the volcano, which is still wearing a little hat of cloud. To the other side, a door leads to a cavernous bathroom and dressing room. 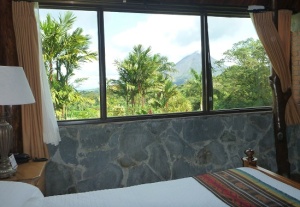 Reception guy: What do you think? Will it do?

L: Really? Can we really have this one? Are you sure? There’s no mistake? Oh, yes please!

D: (holding L back) No, you don’t need to kiss him. He’s just doing his job. Really well.

Having emptied the car, they head out again reluctantly, as though if they take their eyes off the room it will disappear. They negotiate the drive once more, which is even more adventurous downhill. 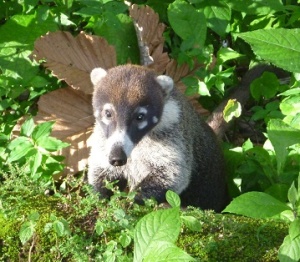 L: There’s a fluffy bottom on the bank with a really long tail.

The bottom turns and a pointy nose and pair of beady eyes assess the car curiously.   The coati decides that they are no threat, and potters on along the bank, paralleling the drive, in full view. Car and coati continue on companionably side by side for a while, until he spots something interesting in the undergrowth and scampers off.

They cross the dam at the foot of Lake Arenal, which sparkles enticingly in the sun. Small boats are tied up to a quay.

L: (surprised, thinking D knows nothing whatsoever about fish) If you catch one, d’you get to keep it?

D: No idea. I know nothing whatsoever about fish.

They follow a dusty, pot-holed dirt road until they arrive at the Parque Nacional Volcan Arenal.

The walk they have chosen takes them along a sandy path through tall groves of sugar cane and then low growing dry forest.

D: Quite a big animal, I think. Hang on, I can see it. It’s a sort of giant pheasant.

L: Where? Gosh, it looks like two different birds stuck together. Its body is a lovely chestnut brown, but its long tail feathers and fabulous head crest have black and white stripes. How curious!

(They later identify her as a female Great Curassow.)

D: Stand still – you’re about to do it again.

D: Stand on a snake. 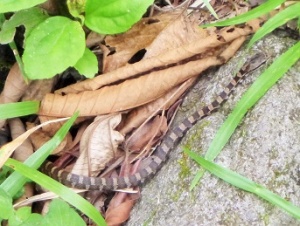 They take a step back to admire a small brown and cream snake, beautifully striped.

(Note – we have failed to identify it. Does anyone know what it is?)

On they go, passing an elderly tour group watching a family of capuchin monkeys feeding in the canopy.

L: Here we are. At the foot of the volcano. Standing on volcanic rock.

They look up. The summit is still in the cloud. 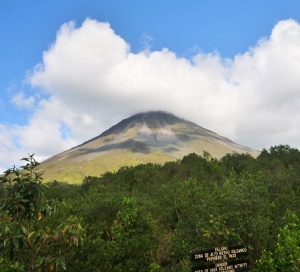 D waits for a few minutes, hopefully, on the wrong side of a wooden sign promising “Danger – Area of High Volcanic Activity”, but nothing happens.

L: To the end. I think there’s a viewpoint just along here.

They climb a flight of wooden steps to re-meet the tour group, who are resting, perched on rocks thrown down by the volcano. From here, there are spectacular views across the Laguna de Arenal, ringed by blue hills.

L: Imagine, there are a couple of little towns under there. They were flooded when the dam was built, in the 70s. I can’t see anyone windsurfing.

D: I think it all happens at the other end, where it’s windier.

American lady: Would you like us to take your picture?

He climbs onto a volcanic boulder, and pulls L up to stand beside him.

American lady: Oh my – will you look at you nimble young things!

D overbalances, staggers backwards off the rock, and falls into a bush.

The Americans are all watching politely. Nobody laughs. Except L.

D climbs back onto the rock.

American lady: Ready? There you go. Say “rice and beans!”

They thank her, and reclaim the camera. They check the photo. They both look like chumps.

On the return walk, L suggests they seek out some thermal springs.

D: Why would I want to pay to sit in a thermal spring with a bunch of strangers when our hotel has an outdoor hot tub? And piña coladas.

They head on back. The hot tub is on and has views straight across to the volcano. Which is still in cloud.

L: Do you think we’ve come all this way, to not quite see the iconic Volcan Arenal after all?

D: It’ll be clear in the morning.

L: How was your run? Yuck, you’re impressively sweaty – you are actually dripping onto the floor.

L: (shooting up in bed and turning to look out of the window) It’s what?

Beyond the garden there is nothing. Just grey sky. Not a hint of a volcano.

L: That’s that then.

D: We’ve still got a beautiful drive along the lake shore this morning. 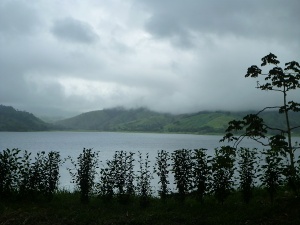 D: It’ll clear up in a minute.

L: Funny how much it looks exactly like England. We could be in the Lake District.