It is time to leave Bangkok. They take a taxi to the metro, and a metro to the bus station. The bus station is nowhere to be found. They ask, and are offered a taxi.

D: That’s ridiculous. It must be around here somewhere. We’ll keep looking.

They take a taxi to the bus station.

Mo Chit bus station has different counters selling tickets to different destinations. There are 59 counters on the ground floor, and 58 on the first floor. Thankfully none on the second floor, but a further 112 on the third floor.

L:   Blimey – any idea which counter we need?

They flag down a passing official and are pointed to a counter, which miraculously is right where they are standing. Less surprisingly, considering the number of counters, there are no queues.

The journey to Sukhothai takes 7 hours. The landscape is flat and carpeted with rice paddies resembling vibrant green meadows or waterlogged lawns or bare muddy swamps. Along the roadside, suburban houses intermingle with tin-roofed wooden shacks. Some are homes, others garages, workshops, barns, shops, restaurants, bars, roadside stalls, bus shelters, shaded rest areas, or outhouses. Most are in use, a few are abandoned and half dismantled, the materials used to build another shack next door.

They cadge a lift to their hotel in a tuk-tuk piled high with a tour group’s luggage. They’ve picked the place for its proximity to the temples, and the pool.   They climb out of the tuk-tuk, and are greeted enthusiastically with a smile, a cold drink and a banana cupcake. They are still in the car park, holding their bags.

L: Lovely, thank you. Delicious. Umm, D, can you just hold my cupcake while I take my rucksack off?

D: (mumbling through cake crumbs) Sure, if you hold my drink.

L: Thanks. But can you hold my drink too? And your drink? And your cupcake? And my cupcake? And the day pack? But don’t put the laptop bag down in that puddle.

They check in, admire the polished wood floors of their large room, agree that the smell of drains from the bathroom really isn’t that strong and that they don’t need wifi anyway, and head off to the bar for a drink. The wooden deck of the restaurant sits over a lily pond, and as dusk falls they listen happily to the frogs and slap mosquitos from their bare arms and ankles.

The next morning is sunny, the temperature pushing 30 degrees. They are on a mission. The ruined temples of central Thailand’s Sukhothai are all that remains of the capital of a vast 13th century kingdom. Although the ancient city walls are under 2km square, there are nearly 200 ruins dotted around a much wider area. They stop at the Historical Park entrance to hire bicycles for the day. 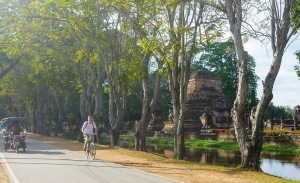 L: Hold on a minute. Don’t do anything hasty. We may need to bargain. Let me work it out. Oh. That’s 75 pence. Go ahead.

They start with the museum, where they find a vast table with a 3D plan of the site and surrounding countryside, and buttons to press to show the location of each temple in little red lights. They press all the buttons.

L: Who was Ram-kam-haeng? This museum’s named after him.

D: He was the king who really put this place on the map. He didn’t found it, but he massively expanded the kingdom. And encouraged Theravada Buddhism here. And invented Thai writing.

D: The squiggles. And after he died, the empire was never quite the same again.

In one corner of the museum, through an open doorway, they spot an unremarkable flight of carpeted stairs. Despite appearances, it does not lead to the museum’s administration office. Above the doorway, a large sign proclaims “The Mystic Tunnel-like Stairway Corridor”.

At the top of the stairs is a blank wall.

L: Oh. That’s it. Is it a joke? I don’t understand. It’s not very mystic, or tunnel-like. It’s not even a corridor! Just a stairway. And it doesn’t go anywhere!

L: Just copies of some drawings or engravings.

D: (reading a sign) They’re pictures of the life of Buddha – the oldest existing examples of Thai drawing – and they were discovered in a mystic tunnel-like stairway corridor at one of the temples here.

L: Let’s go and find the real one.

The Historical Park is immaculate and peaceful. There are plenty of visitors, but no great crowds. Great avenues of trees and clumps of forest provide ample shade and many of the temples are surrounded by moats with water-lilies. Shrines and incense sticks and votive candles decorate steps and ledges. After all the glitter and gold and architectural twiddles of Bangkok’s temples, this is a world apart, of warm bare brick and stone and grass and water and smooth unadorned grey statues. It’s a great big drink for the soul.

Right at the centre of the site is Wat Mahathat.

D: This is the biggest and most important temple. It’s got over 200 chedis and…. 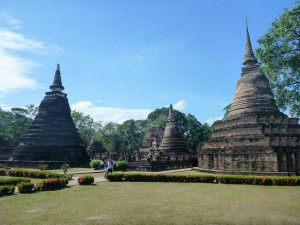 D: It’s a bell shaped tower – you’ve seen them at the temples in Bangkok.

L: Yes, but what ACTUALLY is it?

D: I will in a minute. (He taps his phone). Got it. It’s where you put relics of important people.

L: Thank you. Please do.

The chedis lie scattered across the landscape like huge bells. Amongst the temple columns they admire the beauty of two great seated Buddhas, serene with eyes closed, the elongated fingers of their elegant right hands pointing down to the earth, while their left hands are relaxed, palm up, in their laps. Nearby are two towering standing Buddhas, 9 metres tall, with graceful oversized hands reaching to their knees.

They cycle slowly along the quiet lanes criss-crossing the park, stopping to marvel at the immense single chedi of Wat Sa Si rising from the centre of its reservoir moat, the beautiful, but much restored elephants at the base of Wat Sorasak, and the prickly domes of the originally Hindu Wat Si Sawai.

They head out past the crumbling city walls and dry moat before finding what they are looking for.

At the end of the causeway crossing a moat is the square stone building of Wat Si Chum. In the centre of the facing wall is a narrow vertical slit running almost the full height of its 15 metre façade. Through the slit, a gigantic face is visible. They approach, and pass through the entrance into an open-roofed courtyard which is entirely filled with a colossal seated Buddha. He fills the space like Alice in Wonderland after knocking back the growing potion, and looks sleepily down at them through half closed eyes.

L: He really is the biggest, most beautiful Buddha. Just look at him. 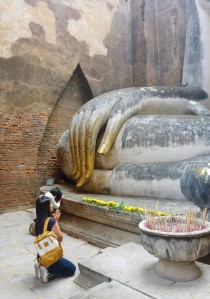 L: (not listening) He’s so beautiful.

Two visitors kneel at his feet, hands in prayer, before rising, lighting incense sticks and leaving him a bunch of marigolds.

The Buddha’s left hand is cupped gently in his lap, thumb nail gleaming. The long slender fingers of his right hand flow down from his knee like a waterfall towards the earth, and have been gilded in gold leaf by visiting worshippers.   It is silent within the walls and the air is heady with incense.

L: (not listening) D’you think the circle of sky above his head looks a bit like heaven?

D: But the gate’s locked.

L: (not listening) His pose shows his moment of enlightenment.

D: It’s where they found all the drawings of the life of Buddha.

L: (not listening) Don’t you think he looks enlightened, with his head in the sky like that, so that you can hardly look at him? It’s like staring at the sun.

D: The corridor’s supposed to run through the inside of the walls. Apparently the kings used to hide in here and speak to the people through a hole. Everyone listening thought it was the Buddha talking.

L: (not listening) I think I’m feeling a bit enlightened. I wish I had some marigolds.

D: I’m trying to photograph him for you, but I can only get little bits of him in. We’ll have to put him together later, like a jigsaw.

L: (not listening) Take a photo.

They head on out into the countryside. L’s state of enlightenment does not seem conducive to riding a bicycle. D stops and waits in exasperation.

D: But you’re going so slowly!

They reach the foot of a hill, and a stone-paved footpath leading up it. L looks unconvinced. 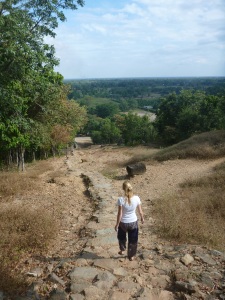 Minutes later they are at the top. There is a tall and crumbling standing Buddha with his right hand raised in a posture of fearlessness, and a view back across miles of flat forested plains, but surprisingly not a single one of Sukhothai’s other 192 ruins are visible.

D: This is Wat Saphan Hin. King Ramkamhaeng used to ride up here on his white elephant to worship the Buddha. It’s twelve and a half metres high.

D: The Buddha. It was called Ruchakhari.

On their way back, D stops and points at the verge.

L: But they’re all shrines. This must be where shrines go to die.

Little broken temples lie higgledy-piggledy in the long grass, guarded by a tiger with no head. It seems an undignified end for objects once worshipped.