D: What the hell is that?

D: What d’you mean what? That!

D: That 30 foot tall woman with the huge chest and the top hat!

They are crossing Leon’s central plaza, where the figure, in her rainbow striped dress, stands the full height of the two storey municipal building running along one side of the square.

L: Usually she has a tiny fellow with her, with a really big head. He’s called Pepe Cabezon.

D: No sign of him. Anyway, who are they?

L: She’s the tall, white, rich Spanish woman who arrived with the conquistadors in the 16th century. He’s the Nicaraguan – short, dark, poor but very intelligent – hence the enormous head. It’s about class struggles and Spanish oppression of indigenous Nicaraguans, and about making fun of the Spanish colonialists. They have a drummer with them. And they dance.

D: Don’t be ridiculous – she’s no dancer. Have you seen the size of her?

L: Maybe not her. But other versions of her. Normally she’d be smaller – about 3 metres high. And he’d be less than half that. So the drummer drums, and they dance and whirl. The drummer controls the dance, making La Gigantona start and stop as he plays, showing that although the Spanish might appear to be bigger and taller, they’re not the ones in charge.

L: Also, I think poor Pepe Cabezon might have a massive crush on La Gigantona but she doesn’t love him back.

D: Didn’t we see them dancing in the street in Granada?

L: Yes! Pepe Cabezon was tiny – he was being danced by a child. There’re street performances of La Gigantona all over the country. Nicaragua loves its folklore and legends.

They sit on the cathedral steps, from where they can see her in all her glory, six times life-sized, peering down at them over her formidable bosom.

Behind them is a doorway, in which sits a man in uniform.

He shakes his head. They are in the wrong place. He explains and gives directions. They thank him. They walk the full length of the cathedral’s outside wall, to the rear, where there is a hobbit sized door. It’s locked. They walk all the way back to the man in the doorway. He tells them it should be open now, but to come back if it’s not. They walk all the way back to the hobbit door. It’s open. They buy two tickets, and look for the onward route.

D: Disculpe, how do we actually get on to the roof?

They are directed all the way back round the building, to the man in the doorway.

He asks for their tickets, tears them in half and points them up a stairway in the alcove behind him.

L: We’ve walked so far already, I might be too tired to get up the stairs.

At the top, a second man takes the other half of their tickets. It is not clear what could happen between the bottom and the top of the stairs, to warrant ticket checks at both ends. They are in a bell tower with views over the plaza. A small side door displays a sign. “Remove your shoes”.

L: Really? Curiouser and curiouser. What with the giant woman and the hobbit door and the ticket men, today’s beginning to feel a bit Alice in Wonderland.

The man looks sternly at their feet. The sign is serious. They remove their shoes and step outside.

L: Oh my goodness. It’s so beautiful! It’s just SO beautiful. Isn’t it beautiful? Look how beautiful it is.

The roof is beautiful. They are in a pristine white world, walking barefoot on a smooth whitewashed surface, under a perfectly cloudless blue sky. They have access to the whole of the top of the building, with its white domes and balustrades and pinnacles and views on all sides.

L: Look, come and look at this. It’s beautiful.

The whole of the city is visible, from edge to edge, and silhouetted on the western horizon are the outlines of several volcanoes.

D: Leon was Nicaragua’s first capital city, built by the Spanish over there by Lake Managua, near the volcanoes. But in the late 1500s it was shaken up by several earthquakes, and then in 1610, Volcan Momotombo, which is the pointy one on the right, blew up big time and buried the entire town under ash.

D: Yup. So the Spanish moved a safe distance and built another town here instead. Now this is Leon, and that’s Leon Viejo – Old Leon.

D: They lost it, completely, for 300 years. It was only found again in 1967, and they’ve been excavating it ever since.

L: Wow. We should visit. But not today. It’s so beautiful up here, I could stay all day.

D: Actually you couldn’t. You’re burning. Your nose is pink.

L: Damn – quick, let’s find some shade. Where next? Can it be something completely different? otherwise it’ll be disappointing after this. Oh, and it’d better be indoors.

D: There’s a folklore museum. In a prison. It sounds a bit eccentric. The woman who founded it made a collection of weird papier-maché figures of various Nicaraguan legends.

They take a hot walk south down the Avenue Central. Vendors sit in shaded doorways selling melons and limes from baskets on the pavement. They find the Museo de Leyendas y Tradiciones in a fortress turned prison turned museum, opposite a bombed-out church – a victim and reminder of the revolution in 1979.

A walkway runs along the top of tall stone walls, and there are murals depicting horrendous tortures inflicted on the prisoners by Somoza’s National Guard in the ‘70s. In startling contrast, in the courtyards and cells, the splendid Señora Toruña has arranged an eclectic collection of home-made life-sized figures of Nicaraguan legend, and around the walls of a pretty enclosed garden are a series of mosaics illustrating the country’s myths and folklore. The combination is disturbing. And eccentric. And fantastic. Alice would be quite at home. 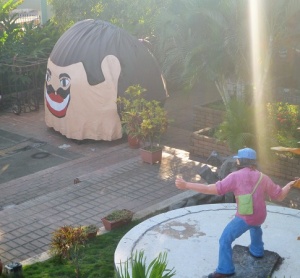 L: There’s a man throwing a hand grenade at him.

They recognise the two figures again, in mosaic form on the wall, The Giantess with long blonde hair and her tiny companion wearing revolutionary khaki uniform.

They explore the cells.

L: Who’s this fine fellow on a dear little pony?

D: Let me check. Oh – he’s not a fine fellow. He’s called Arrechavala and he was vile. Now he’s a ghost. You should be looking a bit more terrified.

L: OK. It’s difficult though – his horse has such a sweet face. Look at its lovely eyelashes. Anyway, tell me the story.

D: Right – let’s see. Arrechavala was an extremely unpleasant Spanish Colonel who hated Nicaraguans and used to beat them as he galloped around through town. He was also seriously corrupt, and made a deal with the devil, who made him exceedingly rich in return for being given the souls of virgins and unbaptised children.

D: Now Arrechavala’s ghost can’t rest until he finds one of his descendants, so he can pass on where he’s hidden his fortune. But Nicaraguans have decided he doesn’t deserve to rest in peace. They’ve vowed never to tell him where to find his relatives, so he‘s likely to haunt the city for ever.

L: Seems a bit unfair on the adorable horse – condemned to ghost-hood for eternity just because his owner was so beastly.

She pats the pony on the nose, and they continue.

L: Yikes – is this the Grim Reaper? This one does look terrifying – quite nightmarish. What’s going on?

D: It’s La Carreta Nagua – The Cart of Death. It dates back to when Spanish caravans used to ride through the country capturing Nicaraguans for slaves.

L: Have you noticed that all the legends we’ve come across are connected to the Spanish conquistadors?

D: It makes sense, I suppose. If you think about it, folklore is a sort of cultural reaction to the important stuff. Once the Spanish turned up here, things would have been pretty traumatic.

D: What was I saying?

L: The Cart of Death.

D: Right. So here it’s being driven by Death and pulled by two dead oxen.  Apparently if you’re ill or dying, you can hear the wooden boards of the cart banging as it makes its way through the streets at night, collecting the souls of the dead.

L: Don’t worry – we’ve got no chance of hearing the cart over the din of our air-conditioning. We’ll be fine.

D: Hold on, there’s more. Curiously the cart can’t cross intersections – it just disappears before it reaches a junction.

L: Oh. That’s handy to know I suppose. So junctions are safe zones. From the Cart of Death.

They leave the cells and return to sit in the walled garden, watching the shadows lengthen.

L: It’s so peaceful. It’s hard to imagine all the unpleasantness that must have gone on while it was a prison and during the revolution.

D: Except for the murals.

D: And the tank over there.

D: And the fellow with the grenade.

They inspect the colourful mosaic panels on the opposite wall.

L: Who’s the fellow with no head?

L: I can see that. But what happened to him?

D: I’m getting to it. He was a much loved archbishop in Old Leon – the original Leon by the lake. One day some men came into his church, chopped off his head at the altar, and walked around the city, chucking his head around between them until they somehow lost it. This made God so cross that He made the Momotombo Volcano erupt and wipe out the city.

L: So that’s why it happened!

D: Apparently so. Anyway, the headless priest is still seen over there, praying and looking for his head.

D: On Thursdays and Fridays.

D: Those are the days when he looks for his head.

L: Oh. Right. Well hopefully they’ll find it for him in the excavations.