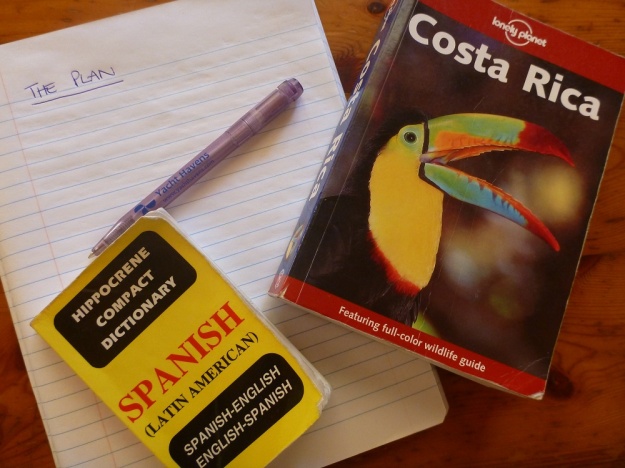 D: So what did you tell them?

L: Well it’s tricky leaving your job without having any sort of plan about what to do next. I didn’t want people to think I was mad. Or having a nervous breakdown. And I thought it might be rude to say that being all managerial and responsible for everyone wasn’t really much fun. So I had to make something up.

L: I said we were going travelling.

L: But that was a mistake, because instead of shutting them up, they then all asked where we were going.

L: Well I had to think fast.

D: Right. Do you know anything about Costa Rica?

L: Umm…it’s sunny, and Spanish speaking. And there are parrots. And I remember picking up a leaflet years ago and reading that their tourism slogan was “Tan your soul”. I liked that.

D: So did that put an end to the questions?

L: No. Some people thought it was an island in the Caribbean, so I had to explain that actually they were thinking of Puerto Rico which is entirely different, and that Costa Rica is the bit of Central America wedged between Nicaragua and Panama. Once we’d sorted that out, then they all asked when we were going and how long for.

D: Ah. Really quite a deep hole you were digging yourself then. What did you say?

D: Three months? What on earth did you imagine we’d be doing there for so long?

L: I said you’d be working. That you can do your translating anywhere in the world that has an internet connection.

D: Great. Thanks a lot. What about you?

L: I haven’t thought of an answer to that one yet. Maybe I’d do something nice and stress free like working in a cake shop. Do you think they have cake shops in Costa Rica?

D: Maybe we should go.

L: Oh alright then.   Wait a minute, are you SERIOUS?

At regular intervals over the next few months….

L: I’ve found a guide book. It’s 15 years old but it’ll do fine.   Did you know that Costa Rica is one of the world’s most peaceful countries? They don’t even have an army – they abolished it in 1949 and made everyone teachers instead. Now their literacy rate is the highest in Latin America.

L: It says here that it was voted the greenest country in the world. Over 27% of the land is protected. And it has the greatest density of species on the planet.

L: They’ve dropped the “tan your soul” slogan. Now everyone says “Pura Vida” instead. It sort of means “pure life” or “live well” or something.

L: Wikipedia says that it’s the happiest place in the world and that everyone lives to over 100.

L: Are you listening?

D: No, I’m trying to finish this document for a deadline this afternoon.

L: Costa Rica seems to have millions of monkeys and toucans and trees and things, but nothing historical whatsoever. I think we’d better go to Nicaragua too.

L: But aren’t you interested in where we’re going?

D: I will be when we get there.

L: Shall I just tell you about the volcanoes and the rain forests and the animals?

L: And the flights and the buses and the accommodation?

D: Ouch! I could tell that was going to happen. What an idiot.

L: And the lakes and the islands and the revolutionary graffiti?

D: Faked! Definitely a set up.

L: Don’t you at least want to know where you’ll be living for two months after we’ve done some exploring?

D: I’m sure it’ll be fine then. How did you choose it?