After a fortnight at over 4000 metres, D&L revel in sleeping under real sheets, unrestricted by the confines of a sleeping bag and layers of clothing in bed, and by being able to get dressed without sub-zero temperatures nipping at their skin.  The toilet flush works because the water isn’t frozen, and there’s warm water in the basin tap.

Today they are heading to the foot of the alluring beacon of Ama Dablam.    The sky overhead is a milky blue and the ground is crisp and white.  On the edge of Pangboche, a coating of snow sits prettily on top of dry-stone walls and bushes and trees, reminding them incongruously of the English Cotswolds.

They cross the river below the village on a steel bridge strewn with prayer flags, and follow a wide path leading up to an open plateau.  The sun streams from behind Ama Dablam’s peak, throwing it into silhouette and making the broad snow-field sparkle.   Two other small groups, half a dozen trekkers each, are admiring the views back to Pangboche.  L strides away across the plateau. 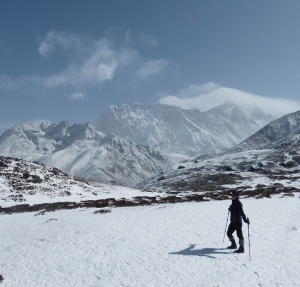 L:  It’s all about the sunshine.

L:  Everything.  How we feel, how we’re experiencing what’s around us.  However magnificent it is, the sunshine affects everything!  Whether we’re warm or cold, whether it’s nice to stop and rest, how many photos we take, how far we can see, the colours that feed into our brains and leave imprints, memories.   Our serotonin levels – how happy we’re feeling.  It’s all down to something as fickle as whether there’s a cloud in the sky.

L:  So lucky.  Hurry up – the clouds are building.  And people are catching up.

She charges off again, across the final rubble-covered plateau, to reach Ama Dablam Base Camp.  The huge level bowl, with a stream cutting through it, could accommodate hundreds of tents, but at this time of year there’s just one expedition aiming for the summit.  Angtu shows them the long ridge that the climbers will follow, over the course of 3 days, before attempting the final steep exposed push to the summit at 6,812m.   He also points out the unpredictable hanging glacier below the peak.

Angtu:  The mountain is not so high, but not so easy.  The glacier is very dangerous – it can fall at any time.  When it does, it usually falls to the left, which is why climbers take the ridge route on the right.  But not always – in 2006, it fell to the right and six climbers were killed. 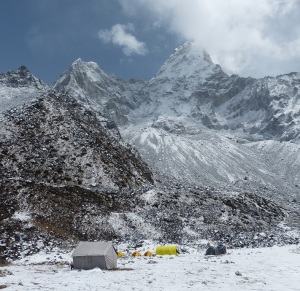 They walk towards the little cluster of expedition tents.  A dozen or more people are standing or sitting in a group.

Angtu:  D’you want to talk to them?

D:  No – let’s not interrupt them.  I think they’re having lunch.

They walk on by.  There’s a whistle and a shout from the camp, and they are beckoned over, welcomed, and offered seats and mugs of tea.  The expedition members are not having lunch.

Angtu:  They’re having a puja.

Angtu:  Yes.  Prayers are offered for blessings, to help them to climb the mountain.  To gain merit.  To clear away any obstacles – on the mountain and in their heads – which may block them in making the summit and returning safely.

On a canvas sheet sit five Norwegian climbers, and between them a Buddhist monk is reciting prayers and mantras from a prayer book.  In front of them a rough rock altar displays climbing equipment to be blessed – helmets, boots and ice-axes, and offerings of sweets.  In a cleft on the altar, juniper sprigs are being burnt.    Four Nepali climbers stand beside the altar, and hand out sweets, chocolate, and fizzy drinks to everyone, including L&D.  A mouthful of Red Bull is poured into every open palm, and then drunk.  A bottle of spirits is produced and everyone is encouraged to knock back a capful.

The monk continues to chant as he gives each climber a small handful of grains of rice that he has blessed and they all throw them at the altar.  He gives them each a tiny pinch of grain for them to carry on their climb.  He lights a yak-butter candle.  He rings a bell.  He wraps his prayer book carefully in a cloth and blesses each climber by touching the wrapped book to their bowed heads.  He ties a piece of orange string around each of their necks, and places a white prayer scarf over the shoulders of the expedition leader.  Lastly, one of the Nepali climbers marks every face with flour, on both cheeks, climbers and support staff and audience alike, and everyone cheers and claps.

D&L greet the climbers and wish them luck.  They’ll continue to throw out good-luck thoughts at Ama Dablam for the rest of the week.

By the time they leave, the other trekkers are just arriving.  Patches of grass are appearing from under the melting snow and the sky has clouded over.   Blue and white morphs to grey and brown.  They swiftly retrace their steps to Pangboche for lunch, faces still proudly covered with puja-blessed flour.

D:  So d’you think it’ll make a difference – the puja?

L:  I do actually.  I’d really like to think so.  The thing is, this landscape is just so enormous, and the weather and conditions up here are so powerful, that it makes one – well, me anyway – feel very tiny and at the mercy of my surroundings.   And if you can’t control your environment, it’s instinctive to want to do all you can to stay on its good side.

D:  So, taking proactive steps to positively affect your own outcome.

L:  Exactly – but up here, practical steps, such as having all the right experience and equipment is not always going to be enough.  We’re too small, and it’s all too big.

L:  Yes – to encourage your environment to be kind and merciful and not give you a hard time.  To appease the powerful spirits, or whatever you believe, by walking the correct way around mani stones, spinning prayer wheels, putting out a string of prayer flags, and by being good, or thankful or respectful.  Or by hoping that each action of a puja ceremony is meaningful.  Because really, those climbers, and all of the rest of us too, are at the mercy of our environment.  What d’you think?

L:  I thought you were thinking about spiritual things.

The way up to the 16thC Pangboche Monastery is lined with mani walls.  Lots of them.  D&L carefully pass them all to the left.   Terraced fields are dotted with neat piles of manure and women are preparing the ground for planting potatoes.  Pangboche is the oldest Sherpa village in the region, and this is its oldest monastery.

L:  Apparently the monk who built this place could fly.

The warm terracotta and yellow colours of the building are welcoming.  Inside it’s dark and laid out with a Buddha altar in the centre of the long rear wall, with a high monk’s chair on each side.  The entire wall is set with niches filled with prayer books and the arms of two long raised meditation platforms reach into the room, laid with thick cloaks to keep the monks warm whilst praying.

Near the door is a plain, white-painted plywood box on a stand.  A monk unlocks the padlock and opens the door.  Inside is the skeleton of an immense hand with elongated fingers, and a pointed skull covered in short-cropped rich brown hair.

L:  It’s been DNA tested and identified as human or nearly human.

D:  That hand is twice the size of mine.

L:  What can I say?  But this is actually a replica.

L:  Nobody knows.  People were so excited about it, that it kept being stolen.  It went for good in 1991.

L:  Apparently the actor James Stewart stole it once.  Though he may have been smuggling it back.

The mani-walls and stupas and prayer flags continue to line the trail away from the monastery.  A path above a steep wooded gorge leads them gently down to the river and then through a pretty forest of rhododendron.  At the tiny medieval-looking hamlet of Millingo, a travelling tailor sits on the ground on a tarpaulin with an ancient manual Singer sewing-machine.  He is making a child’s padded jacket from offcuts of a sleeping-bag.  Angtu is delighted.

D:  But we’re nearly there.

He sets down his pack firmly and orders them tea.  He then delves into his rucksack and retrieves two pairs of walking trousers, worn out at the crotch.  He hands them to the tailor and demonstrates the problem helpfully on the trousers he is wearing.   By the time their mugs are empty the trousers are mended.  Angtu is beaming.

As they walk on, Angtu attempts to explain the complexities of the Nepali caste system.

Angtu:  But even if he wasn’t a tailor, he’d always be a tailor.

Angtu:  And his daughter will be a tailor.

L:  What if she’s not a tailor?  What if his daughter wants to work in a bank?

Angtu:  Even if she does not work as a tailor, she will still be a tailor.  And she can only marry within her own caste.  Or she will have to leave her village forever.

Caste discrimination has been illegal in Nepal since 1962, with free education available for all.  But social identities persist.  Society is divided into religious and professional strata.  Jobs are given to people of similar caste, which reinforces the income divide between castes.  Someone born into a service caste such as a tailor will still find it almost impossible to work or marry beyond the confines of their caste.

They meet up with Phurba, sitting on a wall in the village of Debuche.  Without the detours to Ama Dablam and Pangboche monastery he has had a leisurely day.  The lodge is smart and clean with a Lavazza coffee sign on the exterior wall.  Their room is cosy with crisp linen sheets and even a double bed.  Their own spotless bathroom has soap and towels.  It would be the height of luxury but for one thing – there’s no electricity.

1 thought on “The Puja, the Yeti, and the Travelling Tailor – Nepal – Chapter 17”