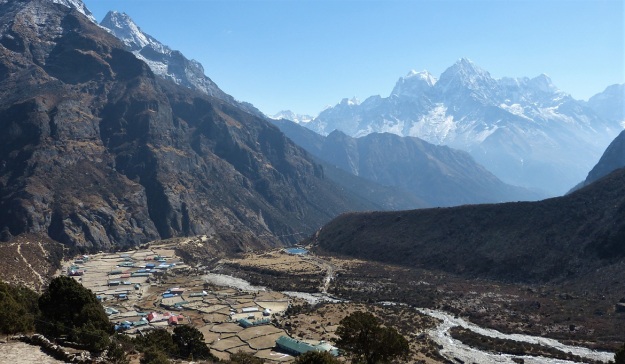 Today is a rest day.  Angtu is shocked that D&L want breakfast at the ludicrously late hour of 9am, but joins them anyway.  They have coffee, tea, cereal and toast.

The waitresses bring bacon, fried potatoes, and something sinister called chicken sausage.  They gaze at Angtu in dismay.

He tucks in happily.

They amble around Namche Bazaar, admiring the multi-coloured buildings nestled in their horseshoe valley surrounded by high white peaks.  They explore the paved and stepped alleys, the hiking shops and souvenir shops, the cafes and grocers.  They scoot past the meat market where dogs wait expectantly for discarded cut-offs, and through the busy weekly market selling eggs, onions and garlic, aprons and kitchenware. 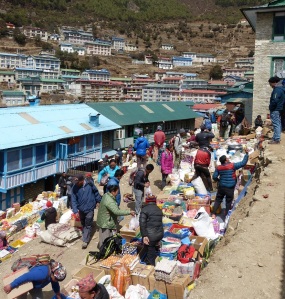 Angtu:  Grains and hides and dried potatoes.  Nepali paper and cotton.  All carried over the pass to Tibet.  And they’d bring back salt and Tibetan wool.

L:  Does that still happen?

Angtu:  Only a little.  Now things in China are cheaper than Nepal, so Tibetans come here to sell us Chinese goods.  Sherpa people don’t make a living from trade any more.  Now it’s from tourism.

They peer through the doors of the monastery, which is closed, but circle it (clockwise) and turn all the prayer wheels.  They eat pizza and drink cappuccino.

They examine an exhibition of Nepalis who have summited Everest.   There are a lot of them.

L:  How come they’re all Sherpas?  Like Phurba.  Almost every single one?

D:  They’ve been living up here, at altitude for so long, centuries, that they’ve become physically superior beings.  Their blood whizzes oxygen around the body better than the rest of us.

Angtu:  Sherpa people have been in this region for 400 years.  They came from Tibet, and when they arrived there was nothing here – no people or walking trails or bridges or fields.  Just forest and grass and rivers.

D:  So were Sherpas the first people ever to come to this region?

Having listened magnanimously to Phurba described as a superior being, Angtu feels it is time to give a gentle shout out to his own ancestors.

Angtu:  Maybe.  Or maybe not.  There is some evidence of earlier people.  Maybe Rai people – shepherds.  I think Rai people were maybe here first. 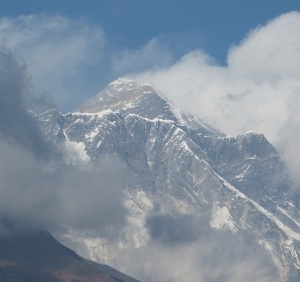 He takes them up to a viewpoint above town.  On the northern horizon, the clouds shift briefly.

He points out the unmistakable dark pyramid of Mount Everest, jutting up from behind its lower neighbours, its formidable south west face too steep for snow to stick to.  The clouds shift again and it is gone.

D&L need to work on acclimatisation, so they’re heading higher, to the village of Thame for a night.  Clouds are rolling over the higher peaks, hiding the sun, as they make their way up a rocky valley.  The trail is theirs alone, except for a giggling family helping their very drunk grandfather home from a boozy morning in Namche.  And an army of litter pickers.

The SPCC (Sagarmatha Pollution Control Committee) has been busy in the area since 1991.  They manage rubbish and recycling collection and disposal in villages, on trekking trails and on popular mountain climbing routes.  They have installed bins along all the major trails – with waste sorted into burnable and non-burnable.  They’ve built 3 incinerators to dispose of burnable waste and dug more than 100 pits for biodegradable rubbish.  They’ve banned glass drinks bottles entirely from the park – wiping out injuries from broken glass and the high cost of transporting heavy and bulky glass waste out of the area.  They even manage a couple of public toilets on the busiest trails.  They promote environmental awareness to local people and businesses and tourists, and organise annual clean-up campaigns.  And it really works.  For all the people living, visiting and walking through this landscape, it is remarkably litter-free.

They pass a patchwork of ploughed fields.

Angtu:  Potatoes, barley and buckwheat.  Only one harvest a year – there’s a short growing season because it’s cold and dry.  It’s difficult to grow enough to live on.  Many people leave their village for months to work as climbers and guides and porters for the trekking season.

Three laden yaks make their way past, ponderously, swinging their heavy heads and long sharp horns in the manner of absent-mindedly handled weapons.  They wear their hair long, like a skirt around their knees.  Their legs are short and their long-plumed tails swish gently behind them.

As D&L pause under a soaring overhang of rock, brightly painted murals of deities looming down on them, it begins to sleet.  The final half hour to Thame is a cold one.  Needles of ice-cold rain pummel sideways into their faces as they zig-zag up a crumbling slope of scree to reach the village – a wet green-grey carpet of close-cropped grass, stone walls and low buildings.

In their lodge they are the only guests.  It is achingly cold but there’s an electric blanket.  They get straight into bed.

L:  D’you know that Thame is a village of superheroes?

L:  There must be something in the air.  This tiny place has produced all the world’s best ever Sherpa mountaineers.

L:  Like Tenzing Norgay, the first person ever to summit Everest along with Edumund Hillary in 1953.

L:  Like both Apa Sherpa and Phurba Tashi Sherpa who share the record for having summited Everest 21 times each – more than anyone else ever.

L:  Like Ang Rita Sherpa, who holds the record for having summited Everest without oxygen 10 times.   They all come from here.

Dinner is excellent, and copious.  They’re not very hungry.  Luckily Angtu is with them.

Angtu helps himself to lavish portions of breakfast.   He and Phurba have slept well, in a room in the lodge.  This morning D&L find their private bathroom rather wasted.  The water pipes are all frozen.  They scrape the iced condensation from the inside of the window and look out.  It’s a stunningly beautiful blue-sky day.  The valley is ringed by mountains – to one side a low shrub-covered hillside, to the other a gigantic slab of snow and rock.

From the crumbling, scrubby ridgetop above Thame, they can see almost into Tibet.  A woman walks by, ceaselessly mumbling under her breath the Buddhist mantra – “om mani padme hum”.  They follow the stupas and shrines set at intervals along the path, until they reach the monastery, built around a courtyard.   The terracotta-painted gompa stands in contrast against the towering wall of rock behind.  They sit on the sun-warmed flagstones, their backs against the sun-warmed wall, and wait for a monk to unlock the door.

D:  There’s been a monastery here for 350 years.  There are over 260 monasteries in the Sherpa region and this is one of the oldest.

L:  Never mind that – look at the views!

A white prayer-flag flutters on a tall pole in the centre of the courtyard, which has buildings on three sides.  The fourth side has nothing – just an immense sky and magnificent views, down over the village and further, to layers of jagged white mountains edging the horizon.

L:   Is that a reservoir, down at the far edge of Thame?

Angtu:  A little hydropower plant.  The river goes into it and makes electricity for all the villages from here down to Namche.

Angtu:  And for grinding grain and rice.  And for cooking and heating water – so local people don’t need so much wood.

They examine the beautiful interior of the gompa, which despite the wooden floors and brightly coloured decorations, is dark and chilly.  Two lines of low wooden prayer platforms are lined with neatly folded, thick cloaks, for the monks to wrap up in when meditating.  Clearly, despite the hydro-power, both heat and light are resources not to be squandered.  They head back outside, to the sunshine and the views.

D:  It’s quite different to a Thai Buddhist monastery.

L:  It’s a different sort of Buddhism.  This is Mahayana.  In Thailand it’s Theravada.

L:  I’m not really sure.  Except that possibly in Thai Buddhism the ultimate goal is to reach personal enlightenment, whereas here it’s to become enlightened and then help others to get there too.  Maybe.  You’d need to ask an expert.

L:  I think so, in many ways.  They both believe in reincarnation, and gaining merit, which in Nepal is called “sonam”, to improve their current and future lives.  And here they believe that mountaintops are the home of the gods.

D:  I can believe that too.  Just look around – if one was a god, where better to live?

Angtu: Mount Khumbila is home to Khumbila – the god who protects this area.  The mountain is too sacred to be climbed.  It’s not so high – just 5761m – but it has never been climbed.

Angtu: Just above Namche – I will show you on tomorrow’s walk.  And of course Mount Everest is sacred too.  The goddess protector of Everest and the whole region is Miyolangsangma.  She lives at the top of the mountain and rides a golden tiger.  She’s the goddess of giving.

They walk back down along the ridge, looking northwards towards Tibet.

L:  Angtu?  Could we walk into Tibet?

L:  No, not now!  Just generally.  Can people just walk across?

Angtu:  No.  Sometimes the borders with Tibet are closed and sometimes open.  Right now a few are open, but only five or six, for local people to trade.  But tourists need permits.  And in winter they are closed with snow.

They cross the yak paddocks in Thame.  Yaks are lying or grazing, wearing woven collars and big bells and wisps of crimson wool.  On their withers is tied a white prayer-flag with Tibetan script printed in gold.

Angtu:  Yaks are very valuable for local people.  If you have a yak, you have milk and curd and cheese, you have wool for clothes and rugs, you have power to plough your potato fields, you have dung for fuel and cooking and warmth, and you have transport to carry heavy loads.

L:  Can the yaks stay there all year?

Angtu:  No – in the summer they will go higher to pastures further up the mountain – to Gokyo – and then they will come down here again in the winter when it snows.

L:  That happens in Europe too, in the mountains.  Not with yaks of course.  With sheep.  And cows.

They find a little used path to take them back down to Namche on the other side of the river.  It starts well but dwindles out.  They weave their way comfortably down a grassy slope, slaloming between clumps of juniper.  The slope ends at a bluff.  A thin crumbling animal track zigs on down to the river far below.  D finds a better way, but longer, and sets off away from them.  L is torn.  She chooses to follow Angtu, not wanting to undermine him or hurt his feelings.  They slip and slide, Angtu grimacing and guiding L from below, while D tactlessly emerges underneath them on a flat trail, looking smug.

At the water’s edge they rest, sun bouncing off the turquoise surface and the broad white river stones, smoothed and flattened by centuries of winter torrents.  The air is cold, the water icy, but the sun is hot on their faces and the scenery spread out before them is like a cinematic backdrop – too big and beautiful to possibly be real.