D leans the bicycles up against a fence and joins L at the start of the footpath. 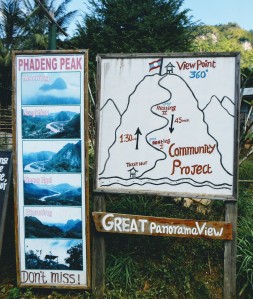 L: I’ve been reading the signs.

L: No. The other signs. “Dangerous.” “Unexploded bombs still in this area”. “One of the most bombed areas in Laos.”

D: Well come on then! It also says “Don’t get off the path.” So we won’t. We’ll be fine! He sets cheerfully off between the bamboo-fenced vegetable plots, and is soon out of sight behind a clump of banana trees. 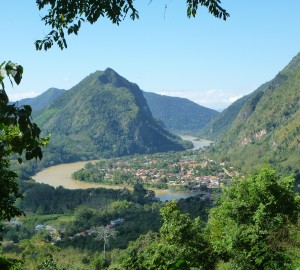 They arrive in Nong Khiaw the previous day, after a four hour minibus ride on quiet, mostly good roads sprinkled with a few potholes of the size that you drive into, and then out of again. The little village straddles the Nam Ou River and the scenery is so magnificent that they just want to choke and fall over.

They walk along the riverbank to find their hotel. They have decided to splash out on the best place in town, at a whopping USD$50/night, and have nervously paid in advance. At the Nong Khiaw Riverside they are given glasses of iced lemongrass & ginger tea, and a room key. L opens the door to their room.

L: it’s another basket. D’you think you can you bear it?

Their bungalow stands on stilts on the riverbank. The walls and ceiling are of woven leaf matting, and the floor is of wood. The room is stylishly decorated, has a four poster bed and smells sweetly of straw. A huge set of French doors fills one wall and leads to a wooden balcony looking over the river. Opposite, a mountain juts out of the water and straight up to touch the sky 1100 metres above.   It is awesomely beautiful. 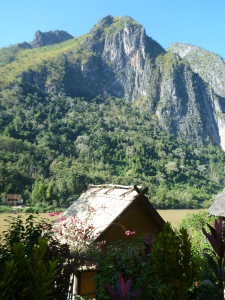 They spend the rest of the day on the balcony. D studies the guidebook while L gawps and takes photos of the view.

D: What shall we do?

D: We could kayak.

L: (not listening) Just fantastic.   Maybe you look better from the back.

L: (not listening) Extraordinary. Or not in the photo at all.

The narrow path climbs steeply through the forest, ducking under madly spiralling vines. They manage not to step on any bombs. At the top, they are in thick cloud, swirling around them. There is nothing whatsoever to see.

They wait, resting in the bamboo shelter perched on top of the mountain.

D: About the bombs.

D: So who were Laos at war with when the bombs were dropped?

L: Nobody really. It was during the Vietnam War, in which officially Laos was neutral. 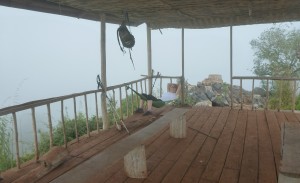 L: Well, some of them were helping out a bit.

D: Who were they helping?

L: The CIA. Is the cloud clearing yet?

L: Yup. Hold on a minute. What d’you know about the Vietnam War?

L: Right. So the communist North Vietnamese had a network of vital supply routes through the jungle known as the Ho Chi Minh Trail. To move their equipment and soldiers down south to fight the Americans and South Vietnamese.

L: Well, a lot of the Trail was actually over the border, in Laos, and not in Vietnam at all. The US was keen to shut it down, and they asked Laos for help. So local people living in the mountains near the border were trained up by the CIA to help the Americans disrupt movement along the Ho Chi Minh trail, rescue any US airmen shot down, and protect an important radar base.

D: OK. But who dropped all the bombs on Laos?

L: The Americans. Any gaps in the cloud?

D: Not yet. What d’you mean, the Americans? You’ve just said Laos was helping them!

L: I know, but the US were freaking out about the potential spread of communism. They did everything they could to stop it, including bombing the hell out of both the Ho Chi Minh Trail and anywhere else in Laos they thought might have a communist in it. It was supposed to be a secret, because of Laos being a neutral country. It’s known as the Secret War.

D: When was this?

L: 1964-73. The US dropped over 2 million tonnes of bombs. Equivalent to a planeload every 8 minutes, 24 hours a day, for 9 years. Making Laos the most heavily bombed country in history.

D: It must have been the world’s worst kept secret. There are gaps though.

D: Undoubtedly. But also in the cloud.

The sun is melting the white layers into wisps to reveal the vivid blue sky behind.   The signs were right – they have 360 degree views of the most bombed, and surely one of the most beautiful, countries in the world. There is space all around them, into which they feel they could fly. On every horizon lush green mountain ridges jut and soar, cut through by fertile valleys, rice paddies, and the lazy curves of the coffee-coloured Nam Ou River, laid out below their feet.

L tries to speak, but nothing comes out.

L: I’ve got no superlatives left. I used them all up yesterday.

On the way back down they are equally careful not to step off the path.

L: Apparently 30% of the bombs didn’t explode. That’s 80 million bombs. Even now people get killed by them every year. And it stops them being able to farm their land safely. Something like 25% of villages in Laos are still unsafe.

D: Are they being cleared up?

L: Yes, but it’s the most unimaginably enormous task. The US have spent over $100 million in Laos over the last 20 years on unexploded ordnance (UXO) clearance, and there are a bunch of agencies and local teams out here doing nothing else, but it barely scratches the surface. Hold on, I’ve got a quote somewhere.

She stops, and taps her phone.

L: Here. So, Obama has just pledged another $90 million for UXO clearance over the next 3 years.  But even that’s not nearly enough. A Mines Advisory Group director reacted to the news by saying: “Before the President’s announcement I feared that the UXO operation in Laos would take hundreds of years. Now I am optimistic this can be reduced to decades.”

They cycle on out into the countryside.

D stops on a corner and wheels his bike onto the gravel verge.

D: I think that’s sort of the point.

He leads the way across a stream and through a meadow, heading straight for a rocky mountain rising sheer out of the flat valley.

D: You’re not looking at it properly.

They are approached by three small boys, who take charge. In impressive English they introduce themselves as Lee, Bia and Guan and announce that they are 10 years old. Lee has a head torch. He leads the way up a steep flight of stairs and into a large cave, 30 metres above the ground. It consists of a wide gallery stretching back several hundred metres, with smaller caverns opening off it, several of them striped with natural light chinking in from fissures in the cliff-side. 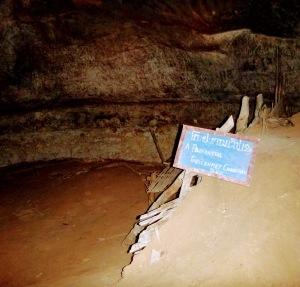 L: This was lived in by villagers, and also by a lot of the provincial government, during all those years of bombing. You can almost imagine it, can’t you? It’s a good safe spot – completely invisible from the outside, and close to a stream.

The boys head deeper in and illuminate various pitch-black room-sized dug-outs to the sides. One area is labelled “Governor”, and another “Provisional Government Chairman”.

D: Tricky place to have an office.

Lee, Bia and Guan scamper back down the steps, but their tour isn’t over. They are beckoned around the foot of the cliff on a tiny overgrown path. They reach the entrance to another, much smaller cave, and clamber between boulders, squeezing through a crack in the rocks.   They look around the small space.

L: Blimey. This was where the region’s main bank was based. For six years!

Before they leave, D takes on the role of banker, and reaches into his wallet to pay the diminutive guides. He pulls out a note and starts to hand it over. The boys’ eyes light up.

D: Hang on, that’s got too many noughts on it!

It disappears swiftly back into his wallet, and is replaced by three more, each with one less zero. One for each boy. They stare at him solemnly for quite some time, waiting for the larger note to reappear. It doesn’t. They shrug their shoulders and dart away down the footpath into the woods.

The village school is putting on a Cultural Evening. They cycle there at dusk, and are earnestly led around the back of the school building to a stage area by several boys in traditional dress. Half a dozen performances are introduced by two tiny people, one girl and one boy. They take turns. One reads a long introduction in Lao from the laminated sheet they are clutching. The other then frowns and studies the sheet carefully before announcing in English “And now a song. Please enjoy.” It seems that whatever the Lao description of the different performances might be, the English translation is the same. Each time, the foreign audience wait eagerly to be told what is coming. “And now a song. Please enjoy.”

The performances are in fact dances, not songs.   The children are wearing traditional clothing representing different ethnic groups.   Sometimes a group of girls will dance, and sometimes they dance in boy-girl pairs, which makes them all giggle and blush. Their bare feet pat softly on the floor and they hold themselves gracefully upright. Most of the dancing is done by their hands, twisting at the wrist, palm up, palm down. It is beautifully elegant, dignified and poised.

The Nam Ou River and surrounding scenery is even more spectacular from a kayak. The water is smooth and slow-flowing. Their guide is called Big. As they paddle gently down the river, side by side, he tells them he used to be a monk.

Big: No. One day I met a friend in the street. He was wearing a fine suit. So I stopped being a monk.

L: Because of the suit?

Big: Of course! So that I too could enjoy clothes and music and food and girls.  At college.

He tells us that his family come from a hill village four hours from here.

Big: It is very remote. My village only got electricity last year.

He points towards the sandy shore. Vegetables grow in neat rows on the banks and several small boats are moored up. Glimpsed through the trees there are houses with woven-leaf walls and palm-thatch roofs. Big explains aspects of village life.

Big: See? This village too, has got electricity now. Just last year. Like my village.

Big: The firewood there stacked up. Used for cooking.

Big: Rice mats. All the rice is laid out to dry in the sun. Before the husks come off.

Big: They keep bees, for honey. In those hollowed out tree trunks on the side of that house. See?

Big: The water point. All the village get their water from this place. For washing, for laundry, for cooking, for drinking.

L: And for toilets?

Big: No. For that they have the forest.

They drift on downstream into the setting sun. Water buffalo bask on the banks and wallow in the shallows. A family drive their cattle and pigs to down to the shore to drink in the cool of the late afternoon. Three teenage girls run down a beach and into the water, whooping and splashing, ducking like dolphins, fully clothed. The sun drops lower. The river glitters silver. The mountains line up in layers, from greys to blues to black. 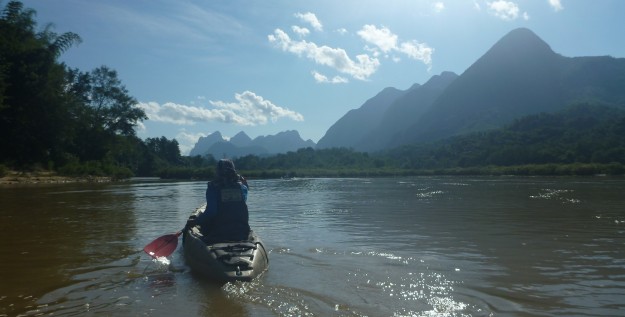