The chicken bus is waiting.

They jog down Granada’s market street to where the battered yellow American ex-school bus is parked, and hop on. They are the only tourists. The conductor collects their fares – around $0.25 for the half hour journey.

Along the route, the bus slows frequently, the conductor hanging out of the open door, shouting over the cheerful music blaring from the radio, at anyone by the edge of the road, standing, walking or cycling. He drums up steady business.

People are returning home having sold their produce – fruit, vegetables, bread – early that morning. The conductor hurls huge empty baskets onto the roof of the bus, and two bicycles.

D: So what’re we going to buy?

L: Don’t know – we’ll see when we get there.   But the book says Masaya Market has the highest quality crafts in Nicaragua.

D: Where are all the other souvenir-seeking tourists then?

L: Don’t know – maybe they all take the 25 dollar tour to Masaya instead of the 25 cent bus. Can’t imagine why. The bus is great!

L: I think sometimes the passengers include chickens. Or people are squashed in like chickens.

D: Oh. No chickens on it today though.

He looks a bit disappointed.

They reach their destination. The bus pulls into a wide open space – several acres of bare earth – and parks among ranks of other brightly coloured vehicles of a similar vintage. Most are emblazoned with a religious message: “With God we are Invincible”, or simply “My God”. It is not clear whether these messages of devotion act as protection for the passengers or are seen as a cost effective alternative to an MOT.

They look around. The large area serves several purposes. In addition to being Masaya’s bus station, to one side is the town rubbish tip. Sorting is in progress among organised lines of blue garbage bags and piles of waste, hampered by the breeze which swirls litter and dust across the yard. On the opposite side people are clustered in front of a wall of tin huts, around which vendors are selling produce.

The other passengers have melted away into the crowd. They look for clues on which direction to head for the town centre – a church tower or taller building perhaps, but there is nothing.

L: Which way, d’you think? I can only see trees and tin roofs in all directions. There’s no obvious way out.

They spot one other pale-skinned figure, and follow it, deeper into the ranks of parked vehicles, but it is soon apparent that he is lost too. They turn around and head back towards the huts. People mill around baskets piled high with plantains and peppers, carrots and cucumbers, plaits of onions and garlic, limes, melons, pineapples and mysterious gourds, sacks stacked like sandbags, of rice and beans and coffee, and cool boxes of chilled drinks. Smoke rises from street-food hand-carts.

L: I can’t believe we can’t find our way out of a bus station. I’m going to ask.

D: No need. I can absolutely find our way out. I’m just thinking.

She approaches a woman with a wide-based bucket balanced effortlessly on her head.

The woman looks uncertainly at her. This IS Masaya Market.

She nods, and points them towards a narrow alley between breezeblock walls topped with sun-warmed tin.

D: (muttering) Precisely where I was thinking.

They venture in, snaking through the slow-moving mass in single file.   To each side are vendors, with baskets of ripening tomatoes shaded under beach umbrellas, stalls stacked high with bags of aromatic spices, and tiny shops selling clothes, plastic kitchen equipment, and bottled drinks. Elsewhere, unrefrigerated meat lies displayed on trays.

They reach a street. Here, larger shopfronts are festooned with multi-coloured goods – as though all their stock is hanging from the front wall like a great curtain of dustpans and dustbins, T-shirts and tablecloths.

L looks longingly at a veranda in deep shade, displaying a collection of hand-made rocking chairs, each subtly different, each equally inviting.

They turn left, lured away from the traffic by a newly painted footbridge leading to a quiet residential street. At the footbridge they are approached by an unsmiling youth.

Youth: Where are you going?

Youth: Not that way.

D looks in surprise at the tidy street leading them temptingly away from the tangle of people and stalls and heat and noise.

Youth: Yes. There are bad people and drugs that way.

Youth: It’s dangerous. You should go right, then left along the main street. There you will be safe.

He shrugs, giving up on them, and walks off.

L: This would all be a bit bewildering for a lot of the tourists staying in Granada. Maybe that’s why   they take an expensive tour to the Artisan Market rather than just hopping on the bus. I’m a bit bewildered.

D: I suppose, if you think about it, the two towns are just really different.

D: Yes, but Granada’s absolutely dependent on its tourism and so is incredibly visitor-friendly. It has to be. Whereas Masaya is an agricultural and industrial town and is just getting on with its life. It simply happens to have a tourist attraction in the middle of it.   Don’t be bewildered.

They step out of the way of a reversing truck.

L: Are you bewildered? 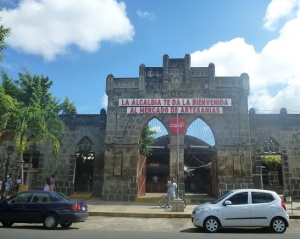 They about turn and, heeding the advice, leave the residential street behind and instead take a parallel route on a busy main road lined with electrical and clothing shops. After a kilometre or so, they reach the distinctive Gothic-fortress style walls of the Mercado de Artesanias. Inside, a hundred dark little stores and stalls are crammed with Nicaraguan craftwork, each merging into the next. There are hammocks and hats, handbags and jewellery, paintings and weavings, leather goods and woodcraft, and a multitude of ceramics.   They are greeted but not pursued by stall holders, left to wander calmly through the maze. At 10.30 in the morning, there are no other tourists. They have the place entirely to themselves.

From the Artisan Market, they walk west, towards the lake. The residential streets are empty of people. Even the traffic seems to have stopped. They pass front yards and open garages displaying hammocks for sale – vivid happy stripes of colour with decorative scalloped edges.

The buildings peter out at a sweep of gravel. To the right is the town baseball stadium, to the left a couple of restaurants, quiet at this time of day, and an empty playground. Ahead is the lake, view framed by slender trees, bare during this time of tropical winter, dry leaves crunching underfoot. A walkway and a sun-bleached balustrade provide perches for half a dozen couples, their backs to the view, entwined. Graffiti speckles peeling paintwork – declarations of loves past and present.

They pick a good sized strip of unoccupied balustrade and look out across the crater lake. The Laguna de Masaya is below them, encircled by steep wooded slopes dropping straight into the water, and on far side, a thick plume of smoke rises from the summit of Volcan Masaya.

D: (cheerfully) That pumps out more poisonous gas than any other volcano in Nicaragua.

D: And there’s lava bubbling away in the crater, though I gather it’s difficult to see through all the gas.

L: Difficult for who? Presumably no-one goes near it, if it’s that dangerous.

D: Oh yes, there are daily excursions. You can drive right up to the crater rim. They know how to do things properly here – none of this letting health & safety get in the way of a good volcano.

L: Don’t all the visitors get gassed?

D: They don’t seem to. Though there was a splendid eruption in 2001 which had rocks half a metre wide flying half a kilometre high. Squashed a few tourist vans I think. But only one person was injured.

L: (nervously) Do we have to visit?

D: I’ve tried quite hard to get us on to a tour, but sadly, everything’s booked up. Drop a few hints that it’s way too dangerous to visit and people can’t get enough of it.

L: (happily) Well, that IS a pity. Good marketing strategy though.

Sometimes one comes across a place which is just outstanding for the simple reason that nothing happens there at all.

The Reserva Natural Laguna de Apoyo is one of those places. Between the bustling Nicaraguan towns of Granada and Masaya, is a steep sided crater filled with lush woodland and a deep blue lake of pristine clear water. And that’s it. 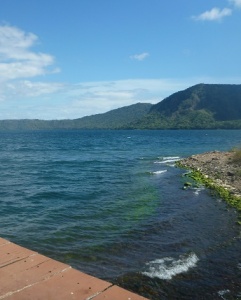 A punishingly steep paved road drops from the lip of the crater to the lake shore. There is a small charge for vehicle access but pedestrians may enter freely.   At the bottom, a pretty lane meanders its way along the shore, shaded by trees, giving glimpses of deep blue water and lighter blue sky between vivid green leaves.   There are half a dozen discreet hotels and hostels tucked away, a few luxury villas, and some locally owned shacks, each with their own little piece of waterfront heaven. There are no shops, no bank, and not much public waterfront access. Visitors can pay a day-rate to enjoy the low key facilities of one of the hotels – a shaded beach chair, a wooden dock to swim from, a stretch of sharp volcanic shingle beach, towels, bar, restaurant, restrooms. Some have kayaks.

Once there, there is nowhere to go, no bars or restaurants or entertainment or nightlife. Just the deepest, cleanest lake in the country, and the protected woodland harbouring orchids, monkeys, anteaters, jaguarundis, falcons and hummingbirds. And an enormously steep hill between you and the rest of the world. It’s a secret oasis. It’s a little bit of paradise.

In a small rural village, the taxi comes to a halt. It has encountered the tail end of a funeral procession moving slowly along the road ahead. A great mound of greenery and flowers has been built atop a truck, which is being driven at half-walking pace. A hundred or more mourners walk beside and behind the vehicle, spreading the full width of the road. Oncoming traffic halts, and the procession flows around it and on. However from behind there is no question of passing. Cars, taxis, buses and motorbikes tuck in respectfully at the back of the procession, where they remain for an hour as they all make their way gently along the road. At the front, beside the truck, a lone trumpet plays poignantly. Adults and children come out of their houses and watch in silence as the gathering passes slowly by. The taxi driver says the funeral is for a little girl.

If you get a chance to visit Volcan Mombacho, do. I think you’d like it.

There’s a lost world crater, bursting with animals and birds and orchids and never accessed by man, not even scientists. I like the idea of that. You may not see them, but they’re there.

There are awesomely awesome views – of Lake Nicaragua and the 365 islets spat by Mombacho into the lake, of the town of Granada, the Laguna de Apoyo, and of smoke rising from Volcan Masaya. You really can see for miles.

And there is my friend the sloth. He’s on the right, close to the path, only just above head height, towards the end of your circuit. You can’t miss him – he doesn’t move much, so will probably still be there when you go. He may be asleep when you find him, but pause for a while. He will wake up, and yawn, and stretch, and smile at you.