Angtu is at a loss as to why D&L don’t get up at dawn, like all the other trekkers he has led and set out before sunrise.  Every day he tries in vain.

But now Angtu needs to put his foot down.  They have a lot of ground to cover and he now knows that L can neither breathe nor walk downhill.  He digs in.

The early morning light drapes the hillside with a chilly blue hue, but the sky above is clear.  In the distance a curtain of morning mist opens briefly to reveal an immense white pyramid, and then closes again, as though they imagined it.  They climb steep cobbled lanes, past orchards and neatly fenced paddocks, and, still cobbled, still steep, on a sunken lane through woodland.  At the top a covered gateway leads them to the Trakshindu La.  The 3070m pass is scruffy and windswept – a bare earth farmyard with a lodge, barns and animal enclosures.  Contradicting all outward appearances, inside the lodge dining room every table has a pretty cloth and a vase with fresh flowers.   Near the door is a huge copper basin filled with water, in which freshly picked marigolds float on the surface.  An elderly woman arranges them lovingly.  It is entirely unclear where in this harsh landscape these flowers could possibly have come from, or whom they are for.

On the far side of the pass a thin cloud blurs the landscape.  From a monastery compound resonates the deep chanting of male voices to the beat of a drum.  Beneath them the serpentine village of Nunthala emerges.

There are several remarkable things about Nunthala.  One is the donkeys.  There are suddenly hundreds of them, in enclosures, on terraces, grazing on dust or being loaded/unloaded, and parading through the village nose to tail.  Another is that the main street looks like a snapshot of a prosperous Cotswolds town.  On each side of the path are large three storey houses with generous front gardens, paved and edged with trees and flower beds and enclosed in neat dry-stone walling.  And lastly there is the tin shack. 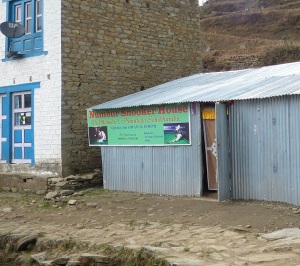 A large tin sign on the large tin shack says “Snooker House”.  And to clarify matters for the disbelieving, there are pictures on the sign of people playing snooker.

L:  Umm…how much does a snooker table weigh?

Nunthala is a day’s walk from tiny Phaplu airport and the nearby town of Salleri, from where there is a tarmac road to Kathmandu.  As such, it is a gateway village, hence the donkeys.  Trains of pack animals transport heavy goods such as gas, kerosene and rice from the roadhead to settlements en route to Everest Base Camp.   The new sandy ribbon road project has also reached Nunthala, in theory providing access for motorbikes, jeeps and tractors.

Walking between terraces of intensely green buckwheat and pink cherry blossom, they are forced to step aside at intervals, out of the way of approaching donkey trains. 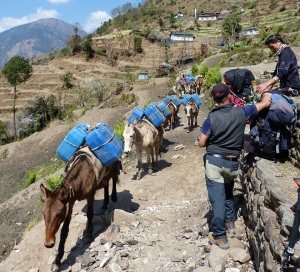 He waves them out of the path of the oncoming four-hooved traffic.

L:  Must we always pass them anticlockwise?  The opposite way to the mani stones?

Angtu looks at her blankly.

Angtu: You should be on the inside.  The uphill side.  Or they will push you off the edge.

The trail becomes punishingly steep, a waterfall of dust and boulders.  They continue down, glad of knee supports and trekking poles.  Below, they can hear, and then see, an icy blue river and a huddle of huts.  This river is their first glimpse of the Dudh Kosi – which they will follow for the next two weeks, all the way to its source, where at 4,700 metres it flows from the Ngozumba Glacier through Gokyo’s sacred lakes.

The tiny settlement of Chhirdi is one of the simplest they have passed through.  With the exception of a single two storey building with a blue-painted balcony, the buildings are low, made from bare stone, wood and tin.  It is not clear which are used for animals and which are habitation.  Goats graze on the steep shrub covered slope above.  Half a dozen women of various ages are sitting on the wall outside the largest building.  All have their faces lavishly adorned with gold jewellery.  They wear enormous hoop earrings, large gold disks spreading across their left nostril and cheek, and golden pendants hanging from septum to mouth.

They are grateful to reach Jubing – to remove their boots, to rest up in their toy-sized room, so small that there’s no space to shut the door unless they are standing on the bed, to wash in a bucket in the tiny tin wash-house, and to find working internet.

Further into their trek, L has attempted to book some luxury.  At $140/night half board they have very high hopes for warm rooms, en-suite bathrooms, hot showers and delicious food, but have so far had no response.

L:  It says: “Sorry to not getting you back sooner I was in the silent Meditation for a month and I couldn’t use any mail or phone.”  Oh.  Curious.  But yes, we’re booked in. 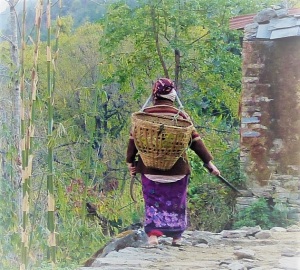 Angtu has been firm again, and in the morning they are on the trail by 7.30am – heading uphill pretty much all day.  The landscape is stunning, the sky is blue, and the temperature pleasant.  They wish they could dawdle – taking two or even three days to cover the ground instead of just one.  Ahead on the path a woman, stick in hand, gracefully flicks cattle dung from the ground into a doko basket on her back.  Bamboo, fruit trees and even the occasional palm grow beside the trail.   Angtu and Phurba chat and laugh.  Phurba sings and quacks like a duck. 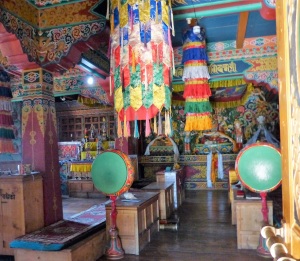 At the top of a steep flight of stone steps they pass through a monastery gateway.  There is a choice – more steps to the gompa itself, or a pause for a tea-stop.  L opts for tea and basks in the sun.  D heads for the steps.  At the top, prayer flags flutter and the gompa door is open.  Inside, his socks slide on the polished wood floor.  The walls and ceiling are alive with colour, shapes and patterns.  Layers of fabric forming cylindrical frills, in reds, greens, yellows, blues and white, hang from the ceiling.  One wall is made up of niches for prayer books.  Two green-skinned drums stand sentinel over low cushioned benches for monk meditation.  Outside again, the sunlight is dazzling and the lush green valley is spread out at his feet.

The village of Khari Khola trickles across the hillside for a kilometre or more.  They are charmed by everything: the cottages, washing lines, haystacks-up-trees, an arbour of blossom across the path, stupas and prayer flags, terraces and meadows, lodges and shops, of which there are plenty.  Sadly they have to move on.

They climb.  And climb.  Magnolia trees are flowering in the oak forest.  The path is steeply stepped and rough going.  The donkey trains are frequent.  Angtu points across a thickly wooded gorge to a village on the far side.

Angtu:  See Paiya?  Over there.  That’s where we’re going.

Angtu:  We have to go round.  A looooong way round.

They begin the contour to reach the head of the gorge.  It goes on and on.  Paiya remains just over there but never closer.  The trail consists of tall and irregular stones forming cobbles, in a soup of liquid mud.  It is narrow, and very slippery.  There’s nowhere to rest away from the mud.  They have been on their feet for 9 hours and counting, and have climbed over 1,200 metres today.  It takes all their concentration to keep their footing.   Every now and then they negotiate an ammonic swamp of donkey pee.

L:  Why do all the donkeys pee in the same place?

The trail is entirely blocked by donkeys.  Angtu goes off to investigate.  He returns.

Angtu:  They’re on a break.

There is no way to edge around them on the uphill side.  So they scramble down off the trail onto the steep bank below, and make their way slowly past.  Phurba holds L’s hand and stands downhill of her to prevent her falling.  She hopes none of the donkeys will stumble off the path and squash them.  They have nearly made it when the donkey train begins to move.

They climb back up the bank and onto the path, still behind the donkeys, and follow them into Paiya.  At the entrance to the village there’s another hold-up.  A workman has left a hammer on the narrow metal bridge, and there is no way one particular donkey is stepping over that hammer.  No way.  After some ineffectual shouting and pushing, the hammer is removed and the donkey train continues.

The Bee Hive Lodge is pretty and has flower beds edged with upturned beer bottles.  Their room is ridiculously dark and has thick leopard print velour blankets.    They put on their head torches despite there still being an hour of daylight outside.

In the cosy dining room is an Israeli family with four small cheerful children.  Impressively, they too have made it here.  There is also a German who speaks fluent Nepali, eats with his hands and drinks water from a jug.

German:  I’ve walked all over Nepal, for 30 years.  Done every trekking route there is.  Many times.  And I think that this could be the toughest.

They go to bed early.

L:  Everything smells of donkey pee.