Before dawn, the howler monkeys start to roar ferociously, like lions, or dinosaurs – huge terrible sounds to burst from such small herbivores. Great-tailed grackles fly to and fro, warming up their orchestra of whistles and rattles.

On Playa Samara, hermit-crab trails criss-cross the dry sand, looking like tracks from a team of unicyclists, while the wet sand is strewn with the swirls and doodles of a thousand unseen snails.

The Joggers are out, heading east towards the pinkening sky, nodding to each other as they pass. There are some who are serious, their sneaker-shod feet staying well above the tide line, sweat shining on toned muscles as they push themselves on. And others who splash barefoot through the shallows, tiptoe over scattered coral, and stop to pick up shells.

The Romantics are out to catch the sunrise, sitting side by side on driftwood logs, waiting patiently with cameras poised, for the brief flare of orange to rise from behind the palms, before swiftly strengthening and paling to yellow.

The Walkers with Purpose are out, ladies sporting visors or large floppy sunhats, pastel-coloured sports shoes, marching in pairs across a mirror lake of sky reflected in wet sand.

The Dogwalkers are out, both owners and animals relishing their social mingling, the early morning breeze cooling warm skin and carrying messages to wet noses of excitements to explore.

A pair of whimbrels are at work on the shoreline, their long curved beaks tweaking tiny crabs from the sand. Eleven brown pelicans are fishing in the shallows, diving into water no deeper than their beaks. 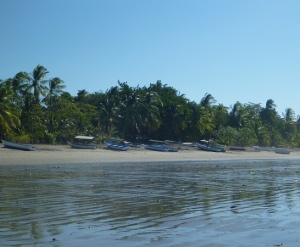 A lone fisherman reels in a big flat fish, line-caught from the shore. Two black vultures stand expectantly close by. A dozen small fishing boats are pulled high up the beach, another dozen bob at anchor in the bay, and beyond them, two yachts. Skippers come out to check their vessels, to prepare them for the day.

An egret and a small blue heron stand side by side watching the ocean, where a single line of swell rises to a clean green wall before tumbling into white confusion and roaring shorewards, fading to a soft ripple sliding gently up the beach to lap their ankles, and then retreating.

The Early Swimmers head out, first wading, then ducking, then striking out beyond the break, to where the sea becomes smooth.

A flock of black-capped terns takes off suddenly, startled by a mother chasing her arm-banded child, dashing full pelt towards the water, out to enjoy the beach before the sun’s strength sets in.

The Commuters are out – the beach as their highway – a bicycle flying by with the wind behind it, a motorbike briefly ripping the sounds of the morning in two. A high-gaited horse with cowboy-hatted rider, snapping dogs in hot pursuit. Children in dazzling white shirts, heading for school.

On the great length and breadth of Playa Samara each of them has the beach to themselves. 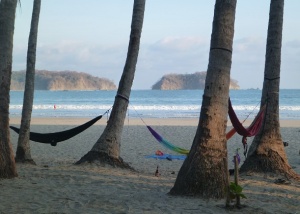 The Shade Loungers arrive, slinging brightly striped hammocks in between trees, spreading towels on soft sand and settling down for the day, breezes rattling through the palm fronds above their heads.

The Sunbathers arrive, lying determinedly in the dazzling light or walking the length of the two-mile beach to top up their tans.

The heat builds as the sun beats down from the cloudless blue and the beach empties of all but the hardiest – most seeking shelter in the shade. From time to time, a wild howling dash is made, barefoot across burning sand, to cool off in the sea.

The temperature peaks, settles and eventually begins to fall. 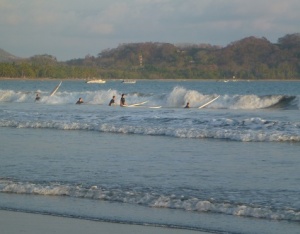 As high tide approaches, the Surf Dudes are out, learners and experts, bobbing and ducking out through the breakers, waiting and waiting, turning and paddling, standing and carving, for the brief addictive thrill of catching the right wave just right.

The cooling afternoon beckons all to the ocean, but still on the great length and breadth of Playa Samara each of them has the beach to themselves.

Locals and holiday-makers take to the water, standing shoulder-deep in groups, wallowing lengthily, chatting. The Sunbathers and Shade Loungers venture back out to soak up the sun in its fading ferocity. 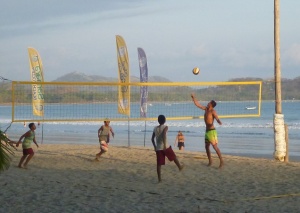 The Ticos play football with much fancy footwork, shouting and laughing, and at the volleyball nets the Golden Kids pat a ball to and fro, jumping and diving and whooping.

The howler monkeys return, munching leaves from low branches, and once more staking their territory with bloodcurdling roars. Frigate birds wheel overhead, sweeping through the sky like aerial dancers. Shadows lengthen, and colours soften and blur as sunset approaches.

The Dogwalkers return, the bicycle and motorbike heading for home, and the high-gaited horse trots back up the beach, haughtily ignoring the insolent hounds once more at its heels. 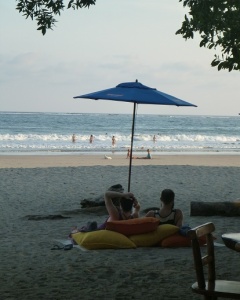 Daytime activities mingle with evening ones, late sun-seekers share space with early cocktail-drinkers, on cushioned loungers.   Four free-range horses stroll through the palms and trample across unguarded towels. They pause at the loungers, roll exultantly, thoroughly, spraying the occupants with sand before standing, shaking, and trotting away. The dogs spot new prey and set off after them, shouting with delight.

The bars fill with people-watchers, observing fitness fanatics perform sand-sticky sit-ups and stretches, over-tired kids coaxed out of the sea, and Smart-phone selfies and sunsets. Then without ceremony, the sun slips quietly behind the headland, and is gone.

After dark the restaurants turn lively, wooing diners with music and fairy lights. Reggae and dance beats bounce from buildings to beach, jostling each other for attention. Geckos gather round decorative lighting, chirruping cheerfully as they hunt, and a band of raccoons scuttles by, snuffing.

Strains of a mariachi band drift along the beach front, and as they move between venues, joyous bursts of trumpet solo – just for the love of making music. In the village quadbikes thunder back and forth on limited stretches of tarmac, and later, revellers shout out to each other as they make their way home, wishing each other goodnight.

The beach is now dark and empty, the sand underfoot almost refreshingly chilly, and out in the black the surf still roars rhythmically, heard but not seen. Overhead the cloudless night displays a spectacular spread of stars on an inky dome stretching all the way down to where sky meets the sea.