The question arises on the way to the airport.  They find themselves changing trains, alighting at platform 1, with minutes to spare to reach platform 24 and their onward connection.  The two of them have packed carefully for their 30 day trek to the world’s highest mountain.  They have done their research and are prepared for all eventualities.  Except one.

D – There are no trolleys.  We’ve got to carry it.

Each slung about with rucksacks and duffel bags and day packs, shoulders straining and knees buckling, they make their way uncomfortably along the underpass, breathing hard.  They stop and look up.

Red faced, panting and sweating, they stagger upwards, twenty-two steps and two more big ones onto the train.  They set down their loads and regard the pile with dismay.

L – How is one porter going to carry all this up and down mountains for a month when the two of us can’t heave it up a flight of stairs between us?

D:  Not all of it’s going up the mountain.   We’ll leave a bag at the hotel.  With the snorkels.

D:  And maybe some other stuff.

L – But how am I going to climb Mount Everest when apparently I can’t climb the stairs?

Doha Airport.  2am.  Waiting for flight connection to Kathmandu.

L – It must be a deliberate tactic to stop people falling asleep.  So as not to miss their planes.  Or make the place look untidy.

L – All the bright lighting and uncomfortable benches and super-annoying armrests so you can’t spread out.

L – Don’t you think that economy long haul flying must be just like childbirth?

D – WHAT?  How would watching films while having meals brought to you possibly resemble childbirth?

L – It’s appallingly uncomfortable but no-one really talks about it, and when you’re experiencing it you swear never to go through it again, and then you forget, and a year or two later there you are again.  Just like childbirth.

D – Right.  No.  No, I think it’s probably nothing like childbirth.

Kathmandu airport at 10am is calm.  There’s no fuss.  Getting their visas is quick and easy.  Retrieving their luggage takes longer.  The baggage carousel is busy with Nepalis collecting imported TVs and suitcase-sized bundles wrapped in intricate webs of knotted rope.

Outside, throngs of people stand in groups – women in brightly coloured saris or tunics and scarves and loose trousers, beautiful splashes of crimson and marigold and fuchsia, and men wearing close fitting topi hats of orange patterned fabric.

L:  Why has everyone got a red smudge on their foreheads?  A tilaka is it?  Isn’t that Hindu?  I thought the Himalayas were mostly Buddhist.

D:  They are – in Sherpa and Tibetan areas.  But we’re not in the Himalayas.  There’s a lot more of Nepal than the mountains.

L: But Buddha was born in Nepal.

D:  Yes, and then Buddhism spread outwards from here, including over the mountains and into Tibet, but since then, Hinduism has taken over in most of Nepal.  Lots of the monasteries in the Himalayas seem to have been founded by Tibetans fleeing across the border into Nepal and bringing Buddhism back with them.

Their hotel has provided an airport transfer.  They are greeted by a man who takes charge of their towering trolley and sets off with it across the car park.  They follow.  In the hazy March sunshine, the temperature is a pleasant 27°C.  He passes ranks of gleaming SUVs and minibuses, and stops next to a small, battered hatchback.  He smiles and waits.

A second man steps forward and loads their luggage into the boot and back seat of the car.  He smiles and waits.

A third man turns up and gets into the driver’s seat.  They set off.  On arrival at the hotel the driver gets out, smiles and waits.

Two porters swoop down the hotel entrance steps, heave the luggage out of the car, and disappear into the building.  D&L check in and are shown to their room.  The porters arrive and set down the bags.  They smile and wait. 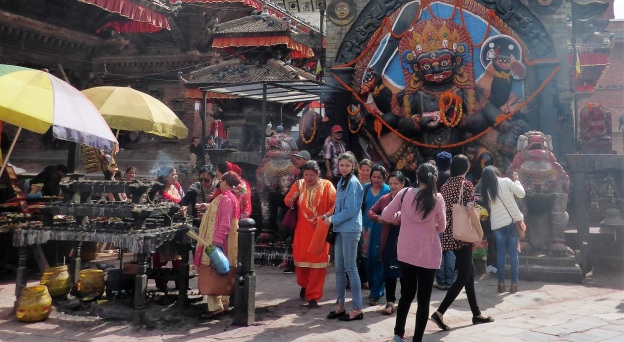